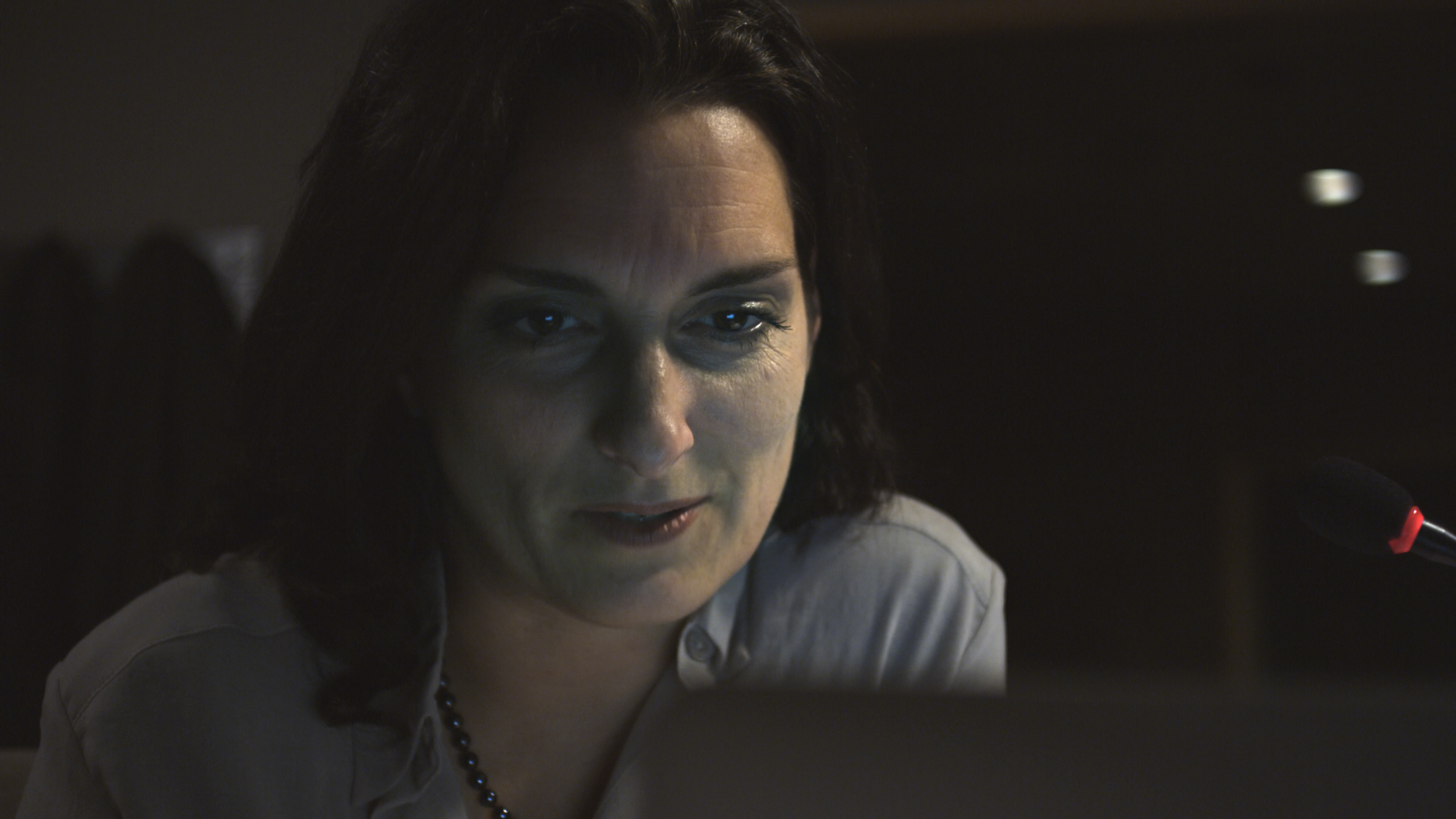 Review of “Cherry Blossoms” in the Tok Toc Knock festival

On the way there, I stopped at a renovated mansion that houses the Brussels-Europe Liaison Office where Tok Toc Knock was showing a 15-minute video by Flemish artist An van Dienderen.

“Cherry Blossoms” is about a simultaneous interpreter working for the EU Parliament. In a room with an impressive mediaeval stone fireplace and scenes from mediaeval life carved by mediaeval artisans for their rich patrons, I could sit in a modernist leather armchair and consult the book that accompanies the post-modern video art.

“Cherry Blossoms” is not a documentary, nor is it entirely fiction. The point is where do we draw the line between the two? Is a documentary a genuine depiction of reality? Can we actually categorise films into genres or is compartmentalisation the way that our societies mediate our knowledge and make it convenient for consumption? That is a very good question.

As the writer of the text in the book (Trinh T Minh-Ha) acknowledges, truth is produced by power and what we consider to be reality is these days contaminated with the techniques used to simulate reality in reality TV programmes and in video games. Have we internalised these techniques to the extent that they actually interpret reality for us and affect what we perceive to be truth?

This is a theme that seems to be recurrent, reflected in many of the works on offer at KFDA and Tok Toc Knock. The richness of our contemporary (performance) arts is revealed in the diversity of approaches and concepts that are generated around this theme: how do we interpret reality, what do we perceive to be truth, how is reality and truth mediated by technology and by power?

The video was filmed in the EU Parliament itself, in the Petra Kelly auditorium, the space designated for meetings and conferences held by the faction of Green MEPs. Petra Kelly was the first leader of the parliamentary Green faction in the German Bundestag, for Die Grünen, the first Green party to stand for election to a national legislative body in the early ‘80s. The naming of this auditorium itself represents an important cultural and political development in European history, and is a tribute to Petra, who died a violent death after years of dedication to the environmental and peace movements.

We have all seen these auditoriums on the TV news and the Petra Kelly auditorium is no different—rows upon curving rows of (blond) wooden desks with comfy, black leather swivel chairs, a headset and microphone, a small bottle of mineral water and a cup and saucer at each place. In the video, the Flemish actress Carly Wijs plays the role of a simultaneous translator occupying one of the interpreters’ booths that surround the auditorium.

I’ve been in the Petra Kelly auditorium twice, for conferences organised by the EU Green parties, and I’ve watched the simultaneous interpreters in their booths. It’s a bit like performance too, even though they have probably forgotten that they are on display for anyone who cares to watch.

The English translator was almost immobile, at times leaning his elbow on the desk and cupping his chin in his hand as he spoke into the microphone; some British phlegm at work there, perhaps? Or boredom? On the other side of the auditorium, the Spanish interpreter was putting his entire body into his work; his facial expressions and flamboyant gestures made it seem as if he were giving a very personal speech with all the passion the subject could muster. Did he really feel more passionate about ‘biopiracy’ than the English bloke?

Perhaps one could conclude that, in reality, these interpreters are mediating between the speaker and listener according to their own cultural norms and, perhaps, there is interpretation of meaning implicit in those cultural performances. Is the interpretation objective?

Carly Wijs is a warm and generous Flemish actress (who speaks flawless English) and as the interpreter in the video she is engaged with her subject. In a booth, she is interpreting a video documentary about the 15 million young Japanese people who resist conformity within their society.

They don’t do this by joining protest movements or street rallies, but by working as little as possible and expressing their individuality through original clothes, make-up and hair styles, creating images of themselves that also communicate their resistance to social norms. This is refusal rather than rebellion as we understand it. We can see the young people being interviewed on her laptop screen, adding another layer to our perspective of reality, a documentary within a fiction that seems like a documentary about a person whose job it is to translate words and cultures in a multicultural parliament and, equally, performing the interpretation.

Wijs smiles with pleasure and even laughs at encountering this colourful passive resistance in a form so unfamiliar to our Western cultures; she stops often to reconsider the translation of a word or phrase and rewind the tape.

“Cherry Blossom” is just 15 minutes long and engagingly intimate, even though we see Wijs walking through the interminable corridors and open spaces in the EU Parliament building with a plastic cup of coffee before she is at home alone in her booth. The video raises questions about how we communicate and translate the meaning of words and images from one culture to another and the type of mediation that is inevitably involved.

These bland, nondescript modernist offices, lounges and conference rooms that could be mistaken for any office building in any city in the world, they are symbolic of the standardisation inherent on globalisation. They are the corridors of power and very much at variance with the colourful, passive resistance of these naïve, young Japanese people.

Was Wijs laughing with pleasure at these Japanese non-conformists or simply with surprise at the oddity of their protest? Was she identifying with them, or, in her grey jacket and straight skirt, cream-coloured blouse, all very conformist, was it possible she felt contempt? Would her translation contain a personal or cultural interpretation that would influence the reception of their ideas for the viewers?